This is a little that comes after another story of mine. I've just put up this page because I kinda wanted to :D And the characters I have for this narrative still have content outsite of that one narrative, as well. Anyways, now you're done with this small section, you can carry on reading xD
-Chocco

A cyborg kid gets stuck inside a mysterious, giant steel building after getting lost far outside the city. Wonder, what goes on in there? 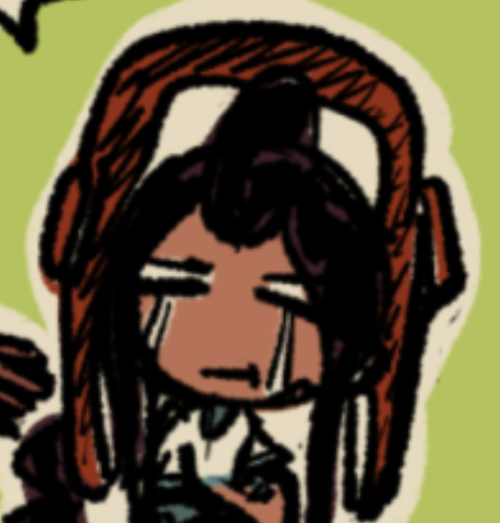 Welcome to the info site for my project, "Steel House in the Prairie". This is something I hope to turn into a comic, someday. Summaries, links, and other important things regarding the project are all here. Thank you for showing interest in my project!
-Chocco

Steel House in the Prairie is a sci-fi about a cyborg kid who gets stuck inside a mysterious, giant building after getting lost far outside the city. Upon her arrival in the building, it turns out that her goal isn't just to escape and make her way back home, but to also somehow prevent a huge catastrophe that awaits if she doesn't do anything.

April is a cyborg kid who finds a large, mysterious building when she gets lost in a prairie. She's made her way inside for survival's sake, but now she can't get out from where she came from. Trapped inside, April soon finds out that the building is populated with free roaming robots, as well as some other organic dwellers, too. A few even decide to help her on her journey to the outside, but unfortunately, it also turns out that some other couple guys have got some business with her and they clearly don't like her.

Even worse, it also turns out that the building has problems of its own: all its dwellers are starting to disappear slowly - robots and organics alike. Good thing April's an everyperson that just so happens to know a thing or two about fighting, otherwise everyone'd be doomed! And I'm sure she's not that big a scumbag to not do anything.

April:
The lost cyborg kid who stumbles upon the big building when she gets lost in a prairie. Usually quiet and a lot more brazen than you'd expect, but also bit of an unambitious smart-aleck that has trouble socialising.

Mr Skatra:
The man who wants something to do with the big building. His plans and reason remain unkown, but we have yet to find that out, of course. He likes doing home activities and spending time with his daughter, but also has some room for building machines and other "villain" stuff, too.

Sarlife (AKA Doc):
A mysterious medical robot who has some sort of deal with April. Works closely with Wyra. A big scatterbrain and can come off as rude, but cares a lot deep down... And about too many things.

Pillia (AKA Lia):
The first friend that April makes in the building. Provides her with all the know-how. Also a friend of Matro and Ida. A happy-go-lucky uvra kid that's a temporary part-time janitor and really into drawing cartoons. Can get a bit foolish sometimes, but that's just her mischievous nature.

Matro (AKA Sivsty):
A transporter robot in the building that drives one of the trains, and also a friend of Pillia. Knows most places around the building from top to bottom and also becomes friends with April. A usually cheerful, attention-loving, virtuoso. Can get a bit overconfident and pretentious sometimes.

Eyn:
The daughter of Mr Skatra who does most of the action-type work. Seems to keep running into April, somehow. Pretty secretive, mysterious, and claims to like "beating stuff up". That aside, she's... never mind, I said she's pretty secretive.

Farqua:
A suspicious gardening and landscaping robot who's kept disappearing since a few days prior to April's arrival. Caught by April and company and held hostage to give information. Loves reading and other peaceful activities. Ironically, he's also insanely quick-tempered, but that doesn't take away from his surprising amount of sense.

Wyra:
A public utility robot who's also strangely hostile towards April. Works closely with Sarlife. A living powerhouse that you'll find either watching TV or about anywhere else you can name in the building.

Ida:
A quiet android who's a mystery to us all... Is she a friend or a foe? Also seems to be Pillia's friend. Although she loves to draw, she finds herself bored almost all the time. Surprisingly, she's quite playful and loves socialising!

Croshen:
The robot who works with fabrics and fibres, who mysteriously disappeared from her place.

Kepter:
The robot in charge of restocking things who has also assumedly disappeared from his place.

Ilekren:
A sennajay whose neighbours were mysteriously taken away from their lodgings.

Auna:
One of the DJ bots that broadcasts building updates and music. A bit of a scatterbrain.

Nuese:
The other DJ bot that broadcasts building updates and music. A bit less of a scatterbrain than Auna but struggles to be taken seriously.

Chavel:
One of the stolluks from the rooftop gardens doing extra garden work due to Farqua's disappearance. A family friend of Pillia's.

Ticket Inspector:
Inspects tickets. Got called a bastard by Duanaste.

Fun fact: Not only was this project inspired by the game Cave Story, but it was also based off of this one assignment I did in 2015 that I got an E grade for! [Steel House in the Prairie] so far has its place as being my biggest passion project of all.

I started coming up with ideas for this project in 2016. I like to call that the "Cloronve Niathea era." The main premise was basically April trying to escape the building, and only that. I wouldn't say it was anything too special. Although, some characters die every now and then, which heightens some stakes. I'd say, it was a bit messy. And so, I left it for a few years.

The story made its biggest return in 2019. I've added more to the plot including real antagonists, and recurring themes, and whatnot which have helped the story get richer as I continue to write it! I call this the "Clonerion era" and I'm happy with the direction I'm taking it, so far.

Big shame I'm putting so much effort into this one, though. This story's built for a game that will probably never exist... Or will it? I dunno. Let's just hope that future Chocco learns to make them one day. Don't wanna put all this effort to waste.

I'm now planning on making this into a comic series! I'm currently writing the scripts for it, and organising and drawing up concepts for it in my spare time. And since the world is right now undergoing a global pandemic, forcing everyone to spend most of our time at home, plus my longer uni holidays, I've been making real significant progress!

Just wanted to say that the "Clonerion era" is over, and we're now enterting the "Proclo era". I'm getting closer to actually getting to draw up the comic! In this phase of development, I'm planning on developing the designs of pretty much everything, at the moment. I'm also planning on really pushing myself to get more into the backgrounds, now. Wishing myself luck!

Now, I've better come up with an actual title for this project, and it's "Steel House in the Prairie", or "SHP" for short. I'm entering a phase where I'm *really* getting into business! Y'know, with my comic-artist journey n't stuff. Let's go!!!